Nippon Paper Industries Co., Ltd. (President: Fumio Manoshiro) has discovered that the high-performance tea, Sunrouge, had the highest inhibitory effect of acetylcholinesterase*1 activity among the 43 major varieties of green tea, including Yabukita that is the most popular green tea in Japan, in a collaborative study with Kyushu University (Prof. Hirofumi Tachibana).
Moreover, we found that long time feeding of Sunrouge suppressed age-related cognitive decline in senescence accelerated mouse*2 and the effect was higher than that of Yabukita.
Detail of this study will be presented at the 21st academic conference of the Japan Society for Food Factors.

The number of the elderly people with dementia has recently continued to increase with the progress of aging in society. The Ministry of Health, Labour and Welfare estimates that the number of dementia patients will exceed 7,000,000 by 2025. There are various approaches to prevent dementia. Among them, several research institutes have pointed out that the daily consumption of green tea could prevent dementia. In addition, a lot of studies have reported a relationship between the ingredients of green tea and cerebral functions.

Therefore, Nippon Paper Industries performed a joint study on the high-performance tea, Sunrouge, with Kyushu University and verified its preventive effect on dementia.
Sunrouge had the highest inhibitory effect of acetylcholinesterase activity, the enzyme that degrades acetylcholine*1. The inhibitory effect by Sunrouge was 4.4 times higher than that of Yabukita and 10 times higher than that of Saemidori (Graph 1).
Moreover, long time feeding of Sunrouge suppressed age-related cognitive decline both long-term memory (Graph 2) and spatial learning and memory (Graph 3) in senescence accelerated mouse. This effect was stronger than that of Yabukita. It was also found that Sunrouge suppressed the accumulation of beta-amyloid*3 and affected the transcript level of the gene associated with the accumulation of beta-amyloid. 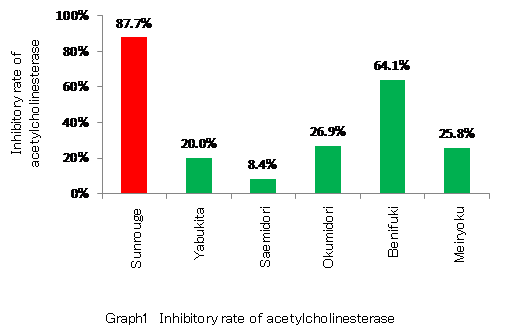 A behavioral test for assessing the learning ability of mouse, the test was performed as follows. Mouse was trained by swimming in a pool with a foothold as the goal to learn the position of foothold for 4 consecutive days. After training, mouse was put into a pool without a foothold. If the mouse learned the position of foothold, the mouse passes goal area while looking for the foothold.

The Sunrouge that created by Institute of Fruit Tree and Tea Science, the National Agriculture and Food Research Organization, remained the difficulty of propagation by cutting. Nippon Paper Industries developed the cutting distribution technique for Sunrouge, using its original technology called in-container rooting technology*4, supporting basic research projects led by the Ministry of Agriculture, Forestry and Fisheries. We have also actively applied to Sunrouge.
What is already known about Sunrouge is that the studies on anti-fatigue, anti-stress and improvement of eyestrain through the synergy effect between catechins, functional ingredients of green tea, and anthocyanins, red pigments those are functional ingredients of fruits and vegetables. Previous collaborative study with Kyushu University reveals that Sunrouge was effective for preventing metabolic syndrome in animal tests. In addition, a clinical study in human found that Sunrouge powder tea suppressed the elevation of postprandial blood glucose level when eaten with a meal.
The present study included a component analysis of Sunrouge, which clarified that Sunrouge was quercetin and myricetin*5 rich tea. Characteristic ingredients of Sunrouge are considered to prevent dementia.

Nippon Paper Industries will carry on the joint investigation of Sunrouge on the preventive effect of dementia together with Kyushu University. We will also enhance the functionality of Sunrouge in our agricultural business and make further efforts in early dissemination.

*2 A mouse species that is subject to rapid aging with actual age. It is often used for the evaluation of the antiaging effect of food ingredients.

*3 Peptide composes around 40 amino acids. It is one of the major components of senile plaque. A cluster of beta-amyloid is known to show neurocytotoxicity.

*4 The planting technique for fully extracting the photosynthetic ability of plants by creating an environment that can provide a wavelength of light, sufficient moisture, and a couple of times more carbonic acid gas than that in air to stimulate photosynthesis using special culturing chambers and culturing devices

*5 One type of polyphenol. It has been reported that quercetin has antioxidant, anti-inflammatory and blood vessel relaxation effects and myricetin has strong antioxidant effect.